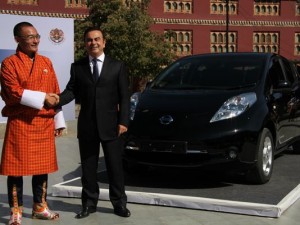 Apparently, if you’re in the nation of Bhutan, you have a lot about which to be happy. It is a nation of “Himalayan paradise” that cares so much about its people that it measures gross national happiness. That is quite a stretch from standard measurements like gross domestic product. Bhutan also lays claim to an immense, and rather sufficient, hydroelectric power system. Now, in hopes of becoming a zero-emission nation, the peaceful Bhutanese struck a deal with Nissan.

The Nissan LEAF will replace all current taxis and government fleets, according to the Associated Press. It is an exciting prospect to think that technology continues to advance so exponentially that it could be within our lifetime that nation’s operate free of noxious, environmentally-damaging fossil fuels. Though the initial deal only supplies a few hundred LEAFs, Nissan CEO Carlos Ghosn predict that it will soon reach the thousands.

Approximately 100,000 LEAFs have been sold worldwide since its release three years ago, and it comes as no surprise that Nissan, as progressive as it is, has brokered a deal with the nation of Bhutan. This story serves as another example of how the Japanese automaker seeks to benefit the world around us.

If you’re interested in a LEAF, or any other great Nissan model, stop down at Leith Nissan in Cary to speak with one of the knowledgeable members of our staff.